Book Review: Jeff Dunham: All By My Selves 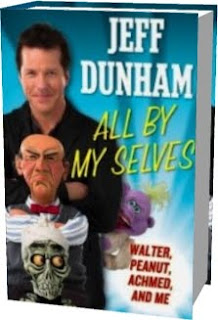 This new book by Jeff Dunham could be subtitled "the true story of how a kid with a puppet and a dream made it to the top of the comedy world."

For starters, let me say that Jeff's new book is a great read for anyone and everyone. It's NOT just for people interested in ventriloquism and comedy.

Sure, the book is packed with funny stories about Jeff and his puppets, but it's also an amazing account of hard work, determination and personal sacrifice of someone who refused to give up on his dream, despite professional and personal setbacks that would make most people say "I quit."

The writing style is all Jeff - literally. Most biographies are written by the subject (in this case Jeff) and a co-author, who tries to make revisions to the book to make it more well written.

Jeff found using a co-author made his words not "sound" like him. So, Jeff did what most do not. He wrote the entire book by himself. The process took over a year. But the result is an in depth, candid biography told in Jeff's own words. As you read the book, it almost seems like Jeff is sitting across from you telling you the story of his life. I've known Jeff for 30 years and this book 'is" Jeff.

I found the book very engaging to read and easy to keep turning the pages to see what happens next. The book is 356 pages and I finished it in two evenings.

The story covers Jeff from the beginning of his interest in ventriloquism when he received his first "dummy" as a Christmas gift from his life long supportive parents at age 8. Him getting the puppet in the first place almost happened by accident.

For most of you reading this, you know of Jeff and his current status as one of, if not the most popular stand up comedian in the world. And yes, Jeff considers himself a comedian who just happens to use puppets as a tool to get laughs. But, many of you probably don't know that it took Jeff nearly 30 years to become the "overnight success" many people think he became after he broke all of the ratings records with his Comedy Central specials, TV series and DVD sales beginning in 2006.

The journey of how Jeff reached the top is filled with great stories of successes and failures, his years of trying to get booked on the Tonight Show with Johnny Carson and being told "no" over and over, but never giving up, the celebrities he has worked with over the years, how he came up with the ideas and created his now household name characters - Walter, Peanut, Jose (on a steek!), Bubba J, Achmed, Sweet Daddy Dee, Melvin the Superhero Guy and the not so successful characters that ended up in his garage on a shelf...like a 3' pizza with talking toppings.

Jeff candidly and openly talks about the good and bad of show business and how it affected his marriage and children. The book will certainly make you laugh, but it will also put a lump in your throat and tear in your eye. He has left nothing out of the story which shaped him into the genuine, honest and funny person you see on stage and TV.

He also talks about the long, lonely night after night shows going from town to town, year after year, working up to 250 shows per year. A lot of the accommodations in these towns and cities (hotels, motels, etc) were places you and I would never stay in because they were so run down and disgustingly filthy.

He talks about the venues he's played - starting with the small shows, to clubs, to theaters and to 16,000 seat arenas. And, the people who helped him along the way.

The book is also peppered with great exchanges between Jeff and his characters as they "help" him tell the story.

And, Jeff tells a lot of things you've never heard about him and his life. His love of a certain TV show, of building his own helicopters and other really cool stuff about him.

The book is also packed with many never before seen color photos of Jeff throughout his career.

You will walk away after reading this book feeling uplifted. It may even motivate and inspire you to also do something great with your own life. And you will laugh as you read - a lot.

I have a feeling we will be seeing Jeff on stage and on the cutting edge of comedy for many years to come.

Do yourself, friend or fan a huge favor and purchase this book. You'll love it.

Available at most bookstores and online at 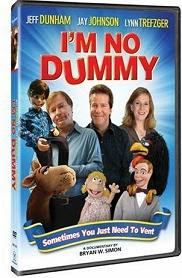 This fantastic new DVD is NOT a video full of stand up ventriloquism performances.

Sure, it has a lot of hilarious bits and pieces of routines from professional, top of their field vents Jeff Dunham, Jay Johnson and Lynn Trefzgler.

But this film goes way beyond just performances.

It's an amazing, fast paced and side-splitting documentary about the fun and entertaining art of ventriloquism.

"I'm No Dummy" is jammed packed with commentary from a who's who in the world of entertainment and ventriloquism and blows the lid off of the absurd notion that ventriloquism is a dying art form.

Interviews and commentary from:

If you have a love for ventriloquism (you must have, or you probably wouldn't be on this website. If you're looking for the Sham-Wow!, you'll need to look elsewhere), you gotta get this DVD!

Posted by Lee Cornell at 4:02 PM No comments:

I want to invite all of you going to the convention this year to attend a
workshop I am presenting called, "Videography Ninja: Creating and Making Money
with Promotional and Performance Videos."

Many of you know my background is in TV and video production. I've been
producing all kinds of promotional, corporate, training and event videos for
nearly 20 years.My degree is in television and film production.

My goal is to make this a fun presentation without a bunch of
techno-mumbo-jumbo.

You'll learn how to make professional looking demo videos to generate more
bookings and revenue, and show videos you can sell after your performances or
from your website.

All without spending tons of money to create.

Hope to see you in July!

On another note, I am now carrying a nice hand made wooden vent and dummy desk
pen gift set on my website. You can check it out here:

http://www.ventriloquism101.com/products/specials.htm#woodvent
Posted by Lee Cornell at 2:51 PM No comments:

Jeff has a few new items coming out over the next few weeks and months.

First is the "Jeff Dunham Show" DVD, which includes all 7 episodes of Jeff's series that ran on Comedy Central in 2009. Great stuff:

Secondly, Jeff's autobiography book, "All By My Selves: Walter, Achmed, Peanut and Me." This is the story of Jeff's long and illustrious career in the comedy business:

It's hard to believe that the 2010 Vent Haven International
Ventriloquist Convention is only 4 months away.

Now, you may be aware of what the convention is all about, but
if not, let me give you an overview.

The event is a nearly 4 day event that runs this year from
July 14th to July 17th.

It's held at the Drawbridge Convention Center in Ft. Mitchell,
Kentucky. I believe this is the 35th year for the convention.

I attended my first convention in 1981, where I met Jeff Dunham
for the first time. He was just a punk teenager, but I knew
even back then that he would be a big star someday.

Here are a few of the pros scheduled to perform and/or
lecture this year:

If you want to become a better ventriloquist, make tons
of new friends and hang out with the professionals in the
business, you simply must attend!

And, at only $125 for registration for all 4 days and
admittance to all of the shows and events, it a tremendous
value.

Check out the details at the Vent Haven website:

Hope to see a lot of you there! Stop by my dealer's
table and say hello.

Have a great week.