Ventriloquism Is a Dying Art, Right?

I have people ask me this question all of the time - usually from people who are over 40 and remember when there were ventriloquists on network and cable television. And you know, you don't see ventrilquists on TV as much, so vent must be on it's last leg, right?

I say a resounding "No." In my opinion, ventriloquism is indeed live and well. Sure, you may not see a ventriloquist on TV as often, but that's because there are no "variety" type shows (which ventriloquists were a major part of) on television anymore.

People are more interested in who Brad Pitt is in love with, or who Britney Spears just broke up with. You know - "entertainment" and "reality" shows. Here's some reality for you - those shows provide no lasting entertainment value whatsoever. Who is going to remember or give a flying crap about who the winner of American Idol was 5 years from now. Nobody. But I digress.

Let's examine where ventriloquists are working today. Comedian and vent Jeff Dunham finished in the top 5 of Comedy Central's Standup Showdown this year, and he had his own prime time Comedy Central special that had unbelievable ratings. They were so good, he was asked by Comedy Central to do a second special next summer.

His "Arguing with Myself" show DVD was in the top 5 on amazon.com for several weeks and sales went double platinum! Amazing.

David Letterman had "Ventriloquist Week" in September. What may have started out as a joke, ended up being a huge success.

Jay Johnson (of the TV show "Soap") had his one man vent show appear on Broadway.

There are several vents performing as the headline acts in the mega successful tourist city of Branson, Missouri - Todd Oliver and Jim Barber, to name a couple.

At any given time there are between 250 and 300 vent items for sale on eBay - year after year.

Ventriloquists may not be seen on mainstream television as much anymore, but the art itself is still going strong. You are in good company.
Posted by Lee Cornell at 6:36 PM 2 comments:

A few weeks ago I had the great pleasure of seeing performances and visiting with two great pro vents in Branson, Missouri - Todd Oliver and Jim Barber.

You may have see 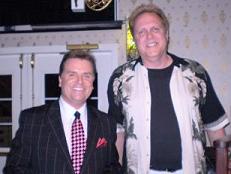 n Todd during "Ventriloquist Week" on The David Letterman show in September. Todd has several live dogs in his act that talk.

My family and I saw Todd's show on the Branson Belle Showboat (where Todd is the headline act) and then visited with him after the show. I also was invited out to Todd's house and got to see his amazing collection of 8 x 10 photos of ventriloquists of yesterday and today. The walls of his home are literally lined with hundreds of photos, posters, etc.

It was a great visit. If you go to Branson, you must see Todd's show. www.toddoliver.com

I also got to see Jim Barber's hilarious ventriloquism, illusion and variety show he performs with magician Dave Hamner.

They own the Hamner Barber Theater. Once again, I was able to visit with both Jim and Dave after the show. Really great people.

Jim's comedy and ventriloquism is 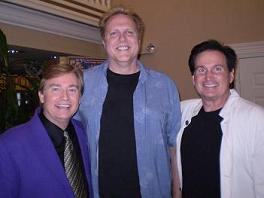 fantastic and Dave's illusion show is magnificant. This show was one of the highlights of my visit to Branson.

Be sure to go see the Hamner Barber Variety Show if you go to Branson.

Lee at the Hog Wild Celebration 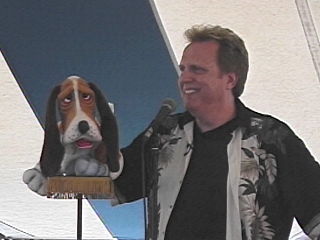 Each year in a small town just west of Indianapolis, Indiana, the community hosts an event called "Hog Wild on Main Street."

There are all sorts of games for the family, food - (featuring amazing pulled pork sandwiches), bands, an open class car show, and various variety entertainment "under the big top" tent that is set up.

The event is free, and all of the proceeds from the sale of food, t-shirts, etc. is donated to several local and state charaties.

This was my second year in a row performing, and my first show using my new Axtell Expressions basset hound, Snickers. I'm hoping this turns into an annual performance event for me.

Hello and welcome to the new "VenTips" blog. The original VenTips email newsletter has been a successful weekly newsletter sent to visitors of the www.ventriloquism101.com website.

This new blog will give people interested in the art of ventriloquism a place to come to read about all types of topics related to ventriloquism, being a ventriloquist, performing, show business and marketing.

And you can catch up on what's been happening in the world of Lee Cornell.
Posted by Lee Cornell at 6:17 PM No comments: