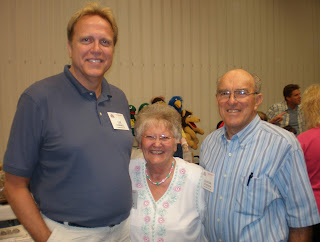 As many of you know, we've lost a true champion of ventriloquism.

When I heard the news, I was in total shock. I had just exchanged emails with him the day before and he was his usual positive, busy as ever self. It's taken me a couple of days to accept the news and I'd like to dedicate this blog post to him.

Clinton was a great friend and mentor to me for over 30 years.

When I was nine years old, I saw that little ad in the back of Popular Mechanics magazine (that so many of us did when we were kids) that advertised the Maher Home Study Course in Ventriloquism.

At that time, Maher Studios was still being run by Fred Maher's wife, Madeleine (Fred had passed away several years before). Clinton wouldn't purchase the business from Madeleine until a few years later in 1969.

I asked my Mom if I could get the course, and at the time, I believe, there was a payment plan option. I took a few of the lessons and then for whatever reason, never completed the course during those childhood years.

I still maintained my love of ventriloquism, did learn how to be a ventriloquist and started doing shows when I was around thirteen.

Then in 1975, I ordered a catalog from Maher Studios, with Clinton, Adelia and son Kevin now at the helm of the business. 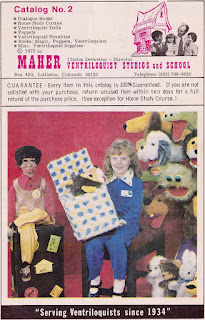 That catalog was read cover to cover many times and I would write to Clinton to ask about puppets and other items in the catalog. He always took the time to reply and was always willing to provide whatever information I asked for.

In 1979, I decided to finish the Maher course that I started when I was nine. Clinton had revised and updated the course and it was during the study and completion of the lessons that Clinton and I became friends. That friendship continued for over thirty years.

He helped me find my first professional figure when I told him what I was looking for - an Archie figure made by CJ Lovik that was no longer in production. He searched around with people he knew until he found one for me. When I launched Ventriloquism 101.com on the Internet in 1997, Clinton never considered me a competitor. He was always happy to promote new products I came up with and we communicated a lot over the years. He was such a generous man who went way above and beyond with any questions I had about vent, performing, puppets and on and on.

We spent a lot of time talking about how the Internet was changing the way people were doing business online, how folks were purchasing things on the web and tag-teamed on ideas to help both of our websites attract new customers.

That became harder to do as the web got bigger and people could find all kinds of "free" ways on the Internet to learn ventriloquism, find used puppets on eBay and other places to purchase vent materials. However, I always told Clinton that people get what they pay for and that those who "got it" and really wanted to learn EVERYTHING about ventriloquism and being a performer, that the Maher Course was THE gold standard in education.

I still believe that today.

One of my biggest thrills was when Clinton emailed me in 2002 and asked if I'd be interested in carrying his new Maher course, and substitute my Ventriloquism 101 video with the course instead of the great video by Mark Wade that was part of the original package. I sold the Maher / Ventriloquism 101 combo course from my site for almost 10 years. I'll always be grateful for that opportunity.

I honestly do not know of anyone who ever had anything but positive things to say about Clinton. His course taught thousands and thousands of people how to be a ventriloquist over the nearly 40 years he owned Maher Studios. And he personally helped every single student with any questions they had.

I always looked forward to reading each issue of his Newsy Vents publication, his blog - Mr. D's Daily Ventriloquist Journal - and was pleased anytime I heard from him.

I was also thrilled to see him on occasion at the Vent Haven Convention. I live in Indianapolis and Clinton was in Colorado, so I rarely had the opportunity to see him in person. But when I did, his warm smile and genuine interest in seeing me still makes ME smile.

I'm sure many others have the same memories of Clinton and how he always treated people right. And with honesty and integrity.

In my opinion, Clinton did more for ventriloquism in the past 100 years than anyone else. Sure there are some amazing performers like Jeff Dunham, Jay Johnson, Terry Fator and others who have made ventriloquism "cool" again to the masses. But no one had the attention day to day, year after year, decade after decade of people truly interested in ventriloquism than Clinton Detweiler. There is not even a close second.

His passing has left an empty place in the art of ventriloquism that I don't know that anyone will ever be able to step up and fill.

I am also saddened that Clinton will not be there to receive the accolades and much deserved recognition for his huge impact on the world of ventriloquism at this summers Vent Haven Convention. The theme this year is billed as "The Year of Maher: Celebrating Clinton and Adelia Detweiler." I hope the celebration of Clinton's life and contributions to the art are still a focal point of the convention. He's certainly earned them.

To Clinton, running Maher Studios, performing, teaching, writing his daily blog, building and repairing literally thousands of figures over the years was NEVER a job. It was what he loved to do. It was his passion...right behind the passion for his family and friends.

Clinton was a friend and mentor to a countless number of people over his long career in ventriloquism.

I will remember his kindness and what a genuine person he was. I saved a lot of emails between us over the past 10 years and will have those memories to re-live from time to time.

I will miss my friend. Rest in peace, Clinton...and thank you.
Posted by Lee Cornell at 5:44 PM 3 comments: