Ventriloquist David Crone has released a new DVD of a live performance of his show.

The DVD, titled "David Crone - He's Big in Zanesville" is a very entertaining show that is "family friendly." 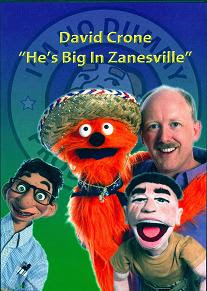 Mixing magic with his cast of characters, David's show is fast paced and has plenty of laughs.

He has been performing for over 25 years. Excellent voices for his characters and great puppet "manipulation" really gives life to David's sidekicks.

David is also one of the official convention photographers for the Vent Haven International Ventriloquist conVENTion.

You can purchase a copy of David's DVD directly from him: