With the huge success of the first "Ventriloquist Week" last fall (which probably started out as a joke until the ratings came in), David Letterman is having a second ventriloquist week the week of February 12-16.

Should be another great week of ventriloquism on network television! Be sure to tune in.
Posted by Lee Cornell at 10:23 AM No comments: 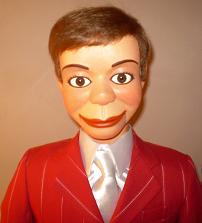 Today I received a new figure. It's a Conrad Hartz dummy that I purchased from ventriloquist Todd Oliver. (You may have seen Todd and his talking dog Irving on "Ventriloquist Week" on the David Letterman show last September).

I visited Todd in Branson, Missouri last October and he was kind enough to invite me to his home to view his puppet and vent photo collection. He showed me a really nice Hartz figure that he purchased from Conrad about five years ago as a back-up for his main figure, Joey.

The new figure looked a little different than Joey, and Todd told me he couldn't get Joey's voice to "match" this newer dummy. It just didn't feel right to him.

So, the puppet was never used in a show and was placed in storage.

I have always wanted a Hartz figure that had this exact look. I told Todd if he ever wanted to sell it to let me know.

He emailed me in January and said he would be willing to sell the puppet and I jumped at the chance to own a Hartz with no wait. 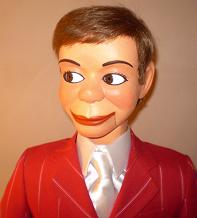 The controls are silky smooth and quiet. The dummy has one of the best paint jobs I've ever seen. Conrad's work is second to none.

He has minimal movements - a moving mouth and side to side eyes - but that's all this figure needs. He has a ton of personality.

Todd also included a custom made red suit, red leather "alligator" shoes, white silk shirt and silk tie that he purchased in L.A. This clothing really adds to the personality of the puppet. 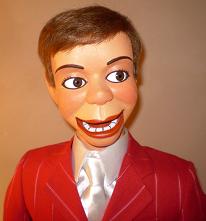 This guy is going to find a place in my show very soon.
Posted by Lee Cornell at 8:38 PM 1 comment: