Lunch With Dunham and Haner 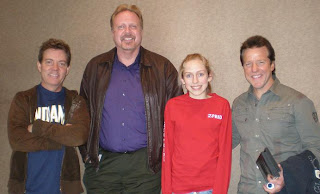 Jeff was in Indianapolis at Conseco Fieldhouse for a show Thursday night. I wasn't able to attend.

He was kind enough to give me a call and invite me to lunch on Friday. As a surprise, I picked up my 13 year old daughter Heather from school, only telling her I was taking her to lunch. I didn't mention we were meeting Jeff.

We arrived at his hotel downtown and Heather pretty much froze up in awe for the first 10 minutes after meeting him.

We had a great lunch at Shula's restaurant with Jeff, Brian Haner (Guitar Guy), Jeff's manager Robin and a couple of other members of Jeff's traveling group.

As usual, the show on Thursday night was a sell-out, with about 10,000 in attendance.
Posted by Lee Cornell at 3:17 PM No comments:

The Real Truth About Jeff Dunham 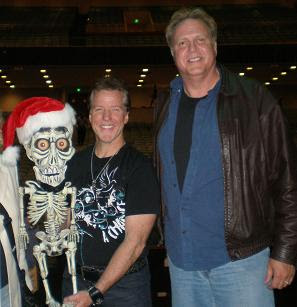 I've had several people email me recently to ask if I knew how Jeff Dunham had become such an "overnight success."

He's been all over the TV lately on Comedy Central, is selling out 10,000 seat stadiums, selling millions of DVD's and is pretty much the hottest comedian working right now.

His Christmas special on Comedy Central was the most watched show on that network in its history.

So, exactly how did Jeff achieve this "overnight" fame and fortune. Well, I'll tell you.

A lot of people who think Jeff made it big in a short period of time probably did not know much about him until his first huge Comedy Central hit "Arguing With Myself" which aired a couple of years ago. Many think that's when Jeff's career took off.

Jeff has been at this for nearly 30 years. His "overnight" success is the result of constantly working in all venues - comedy clubs, private events, corporate functions, television, etc. since the early 1980's.

I met Jeff for the first time when he was a teenager in 1981 at the Vent Haven convention. He certainly doesn't remember me from back then (even though we have become friends over the past few years), but I certainly remember Jeff. His routine back then was very funny and his technique was flawless.

He was extremely well known in the small fraternity of ventriloquists, but not so much to the general public. Jeff used the more traditional "cheeky boy" hard figure back in those days and he had an amazing bit where he carried on a 4 voice conversation with 3 characters.

I remember almost the whole routine word for word even after all of these years. I can honestly say that even at that time I knew Jeff would become a big name superstar comedian someday.

Jeff continued to work on his material, his comedy and on character development. He wanted to appeal to a wider range of audience and he felt he would best be able to do that by moving away from the traditional ventriloquist dummy to more unique characters.

Jose, Peanut and Walter were the result and have been the core of his show for many years.

All the while Jeff continued to work and work on being the funniest performer he could be. Comedy is his forte. The puppets are only the vehicle he uses to express his humor.

By the time Jeff struck a deal with Comedy Central for his first special he was extremely successful in the comedy club circuit. He had honed his skills by working nearly non-stop for 25 years. He was ready.

The first special was a smash. His first DVD was the best selling comedy DVD of all time. It sold over a million copies. Jeff became a household name. People began coming up to me and asking if I'd heard of this "new" comedian puppet guy Jeff Dunham. I just smiled and nodded (I still do).

Over the past 2 years Jeff has eclipsed every previous level of success he's achieved. He has made ventriloquism "cool" again. He makes all of the rest of us strive to be funnier and better performers. He has added even more characters that have become famous in their own right. Namely Bubba J. and Achmed.

Jeff is the Edgar Bergen, Jimmy Nelson, Paul Winchell of our generation.

I don't think Jeff has peaked yet. I know he has lots of other ideas he wants to try.

So...Jeff Dunham "overnight" success? Hardly. He's put in the time and effort most are not willing to do. He deserves all of the success he is now enjoying.

If you are a vent, take Jeff's biggest piece of advice. BE FUNNY. Learn how to truly make people laugh.

Put away the puns and the stupid corn ball jokes. Work on developing your own unique characters. And practice as much as you can on putting together a routine that will keep the audience laughing.

That's what its all about.
Posted by Lee Cornell at 7:23 AM 1 comment: