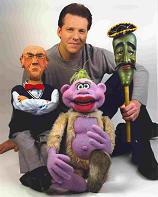 Well, the results are in for the 2007 Comedy Central Stand Up Showdown contest. Out of dozens of comedians that were in the running, Jeff Dunham finished a very respectable 5th.

I also want to personally thank everyone who voted during the month. I sent daily email reminders to several Internet mailing lists, and if you received those reminders and voted, you can pat yourself on the back for helping Jeff finish in 5th place.

This is a big deal for all ventriloquists.

Jeff will be taping a new prime time special for Comedy Central in a few months.

Jeff being on Comedy Central, the Tonight Show, Letterman, etc. only helps all of us by putting vent in the mainstream.

The secret to Jeff's success?

First and foremost, he is very, very funny. He is a comedian, that happens to use ventriloquism as his method to express his humor. He also has worked his tail off for 25+ years to get where he is today. And, he is original. These things combined have all contributed to the success Jeff now enjoys.

My web sales have increased the past year or so - partly due to the exposure ventriloquists have been getting on television.

I've received several calls and emails from various media requesting interviews about my ventriloquism101.com website and ventriloquism in general.

It's a good time to be a ventriloquist. Capitalize on it while the interest is high.
Posted by Lee Cornell at 5:53 PM No comments: