Why You Should Attend the 2018 Vent Haven ConVENTion

So today is January 13th. The annual Vent Haven ConVENTion is seven months away. Why am I writing about it now? And more importantly, why should you attend?


Let me tell you a little story.

I went to my first convention in 1981 and had been a ventriloquist since I was a nine year old kid. I was now 24. I was aware of the names of all of the "stars" of the day who would be there. Names you probably wouldn't recognize today - Johnny Main, Bill Boley, Bill DeMar, Warren Chaney, Garland Boyd, Jimmy Nelson, a young Mark Wade and an even younger Jeff Dunham. Jimmy Nelson was my childhood idol and I also knew Dunham would be a superstar someday.

I'm guessing there may have been 200 or so attendees that year. Being 24 years old, I wanted to attend the convention to learn how to take my show to the next level and socialize with other vents and perhaps have a chance to chat with the big guns. But a funny thing happened. Seeing all of the ventriloquists there, the news media, the stars, etc., I began to feel a bit anxious, intimidated and nervous.

For the three days of the convention, I barely talked to anyone. I briefly spoke to Jeff, may have said hello to Jimmy, but for some reason, stayed mostly in the shadows. I did attend the workshops, but didn't ask questions, even though I had many.

I knew at the end of the convention that I should have interacted more to have gotten the most out of it. I took away some great ideas from the lectures that I used to help my shows. But I knew at the time, that to really get involved with the vent community and grow, I needed to attend more than a single convention.


Ventriloquists on TV sort of went the way of the dodo in the 1980's, although I still performed some with vent and magic. But I was also a lead singer and guitar player in a rock band, so I focused most of my energy on playing live music and not with puppets. The years went by, I went back to college, got married, had two great kids and even though I still kept ventriloquism on my radar by following the careers of Jeff and the few others like Jay Johnson and Ronn Lucas, as well as being a member of a vent club, performing as a ventriloquist was on the back burner.

Then in 1997 the bug bit me again. Hard. I had just gotten my first personal computer a year earlier and was just getting the hang of this new thing called the internet. I decided to create an instructional video on how to be a ventriloquist and began selling it online. I began performing again. And the biggest thing I did in 2001 was attend the Vent Haven ConVENTion again. Only this time, I knew how I was going to approach attending. I had a dealers room table. I went to all of the lectures and took detailed notes, I went out of my way to meet my idols and other attendees. I wanted to squeeze and soak up as much as possible to make me a better performer.

I came away from that convention recharged and I couldn't wait to get back to performing and expanding my ventriloquism101.com website, adding dozens of resources for other vents.

I also realized I needed to keep going back to the convention  to keep me fired up. To share ideas with other like minded people. An energy that I couldn't sustain being about the only vent in my home town. And I've been  back to the convention every year since my return in 2001. In 2017 I was thrilled to be asked to perform on the Wednesday night show. 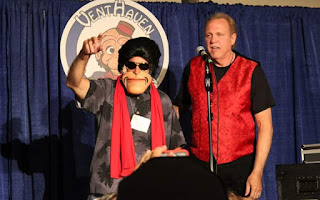 That's why you need to go. Either as a first timer, or as a returning attendee. Being around other vents (now over 400 a year), learning from the pros, taking in the shows, the dealers rooms, talking over ideas with other performers and expanding your knowledge and technique to become a better ventriloquist. I learn something every year when I go back. It's like a family reunion. There's nothing like it. Period.


The reason I'm telling you this story in January is to nudge you into registering NOW! (Simply click on the picture of the brochure at the top of this post). While you're thinking about it. Make the commitment. Register and then spend the next few months saving up the money you'll need to go. Don't wait until July and then just let the week pass you by. If you are a performer, look ahead on your calendar and block these four days out from your performance schedule. The value of making you a better vent far outweighs missing doing a show.

If it's your first time attending, I'll look forward to meeting you. If you are a returning vent, I'll see you there!

A dream came true for me at the Vent Haven ConVENTion in July of 2017. I was asked to perform on the Wednesday night show, along with Lori Bruner and Pete Michaels. 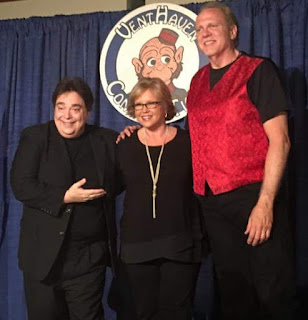 My first convention was in 1981. I was so in awe of seeing many of my vent heroes that first year.

Fast forward to 2017 and I have become friends with many of the pros in the business I've admired for years, as well as many of the attendees.

I wanted to do an act unlike one anyone had seen before at Vent Haven. The premise was to have four mini-acts to the routine which ultimately were to go wrong.

I got into an argument with a microphone stand, had my Sammy King tribute go down the toilet when Francisco the Mexican Parrot refused to do the bit, got tackled by retired NYPD police officer Vinnie Ewart when he mistakenly thought I was ripping off Jeff Dunham's Achmed routine and closed the show with an appearance by the King (with audience member David Turner).

I think the audience had fun and I had a blast playing the part of a performer who's act has gone off the rails.

Hopefully I'll have the opportunity to be part of another show there in the future. I'll never forget that night. Can't wait until next years convention!

Posted by Lee Cornell at 7:53 PM No comments: