A Lesson From Jeff Dunham 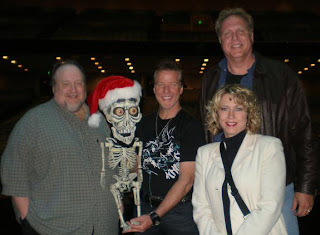 I had the great pleasure of going to see Jeff's show last night at the beautiful Emens Auditorium in Muncie, Indiana. The theater seats 3800 people and Jeff sold out two shows, as he continues to roll across the country.

My wife Cheryl attended with me and we met up with pro magician, vent, author, ventriloquism historian and all around funny guy, Tom Ladshaw.

This was a college venue so Jeff was playing to a great crowd. It was also "Parents Weekend" at the university and at one point Jeff made the comment after a joke, "That would have gotten a lot bigger laugh if you weren't sitting next to your parents."

We only had a few minutes to chat backstage between shows and then my wife, Tom and I went out for a late dinner. It's always a real treat to spend time talking with Tom. This guy is a virtual encyclopedia when it comes to anything vent (or pretty much anything else, for that matter).

Jeff's show was very good. I have seen his show many, many times over the years and never grow tired of watching a real professional work. There was a lot of new material in the act, which will be on his new Christmas DVD, which is scheduled for release on November 18th.

You can pre-order the DVD at this amazon.com link now:

Jeff has a lot of other REALLY cool things in the works, which I won't go into here as to not let the cork out of the bottle.

While I indeed laughed a lot at Jeff's routine, I found myself watching more last night from the perspective of a ventriloquist/entertainer and studying what Jeff does to really just kill the audience night after night. Jeff has so many great characters.

This leads to a good topic of discussion.

How many puppet characters should you have in your show? I've seen performers who have literally a half a dozen or more dummies and puppets they use in their show.

And, I've seen some very good acts that only use one or two characters. What's the answer?

You should only use as many characters as you can develop a unique personality for. Period.

Remember the comment above about the performer who had over six figures and puppets he used in his show? Well, they all sounded the same. Their mannerisms were the same. The manipulation was the same. In other words, ONE puppet would have been sufficient for this performer.

You MUST have a completely different personality, voice, attitude and mannerisms for all of your puppets. And, just as important, those characteristics need to be different and a contrast to your own personality. The wider the gap you can create between your personality and that of the puppet, the greater the illusion of life with your characters.

This is what makes Jeff such a great ventriloquist and performer. Walter, Peanut, Jose, Achmed, Melvin, etc. all have completely different voices, personalities and character traits. And, those characteristics are different than Jeff's personality.

This is key to making the audience forget that the puppets are not living beings.

So, videotape yourself performing with your different puppets. Watch the video and be honest with yourself. Close your eyes and just listen to the sound. Do all of your puppets sound about the same?

Finally, just watch yourself and see how you react, move, etc. while the dummy is talking. Then watch just the puppet and see how it reacts when you talk.

These movements, actions and reactions should be automatic. That's how you create life in your puppet. And it only comes with practice and experience.

If you see you need improvement in these areas, head back to the practice room and really take the time to develop a unique personality and voice for all of your puppets.

Thanks Jeff and Tom for a great evening. (OK, you too Brian and Robin).
Posted by Lee Cornell at 4:05 PM 1 comment: