I received a new, great little figure the other day from teen up-an-coming vent and figure maker, Jeffrey Golc. 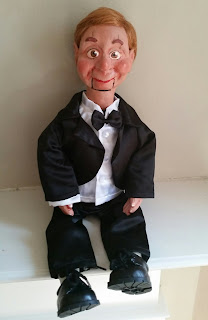 It's a mini McElroy tribute dummy. 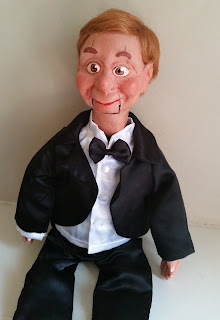 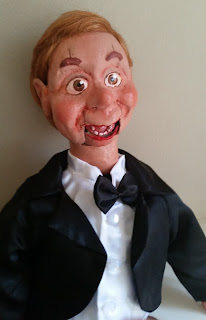 I met Jeffrey in my hometown of Greenwood, Indiana when he was 7 or 8 years old. My daughter was playing on the middle school basketball team at the time and Jeffrey was in the crowd.

I saw this little kid in the bleachers playing with what looked like a stuffed Mortimer Snerd dummy. I went up to talk to him (I found out his older sister was on the basketball team with my daughter) and saw that he had actually modified the dummy and added a simple headstick. I thought this was quite clever for someone his age.

We struck up a conversation.

I found out he was REALLY interested in ventriloquism. I mentioned the Vent Haven International convention to him and his mom and he attended his first convention that year.

Fast forward 8 years. Jeffrey is now in High School, is doing shows, writing routines, building figures, inventing new products for majpr puppet companies and rubbing shoulders with some of the greats in the world of ventriloquism.

He has recently decided to focus on working up a great show and is not presently building many figures.

And, he is just one of the nicest and respectful young men I've ever met.

He has also, I believe, attended every convention since that first one I mentioned to him about all those years ago.

Watch out for Jeffrey Golc! It's a name, I predict, that will be known by many over the coming years. 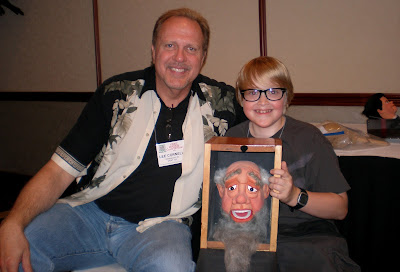 Posted by Lee Cornell at 3:22 PM No comments: