Watch this moving, must see video. It might change a life... 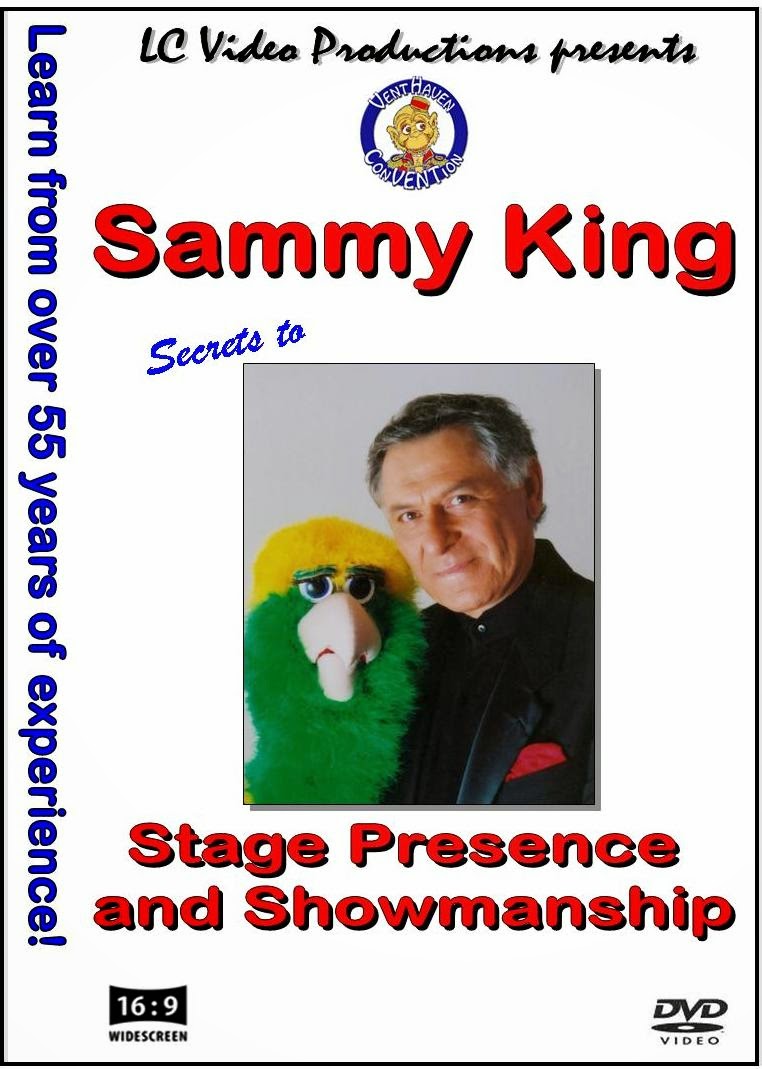 Well, it's only a couple of more weeks until the Vent Haven conVENTion! (July 16-19).

I hope to see a lot of you there. I do realize some of you won't be able to make it, so I wanted to let you know of my newest DVD production and make it available for you to order if you're not attending the convention.

And, at the special convention price I'll be selling it for!

It's called "The Secrets to Stage Presence and Showmanship."

For you young whipper snappers who may not know who Sammy King is, look him up on the Internet. He is one of the most successful ventriloquists of all time. He has so much knowledge to share about this wonderful art form.

NOTE: If you're coming to the convention, please wait and pick up a copy there.

I have my inventory already duplicated and set aside for the convention and have a small separate quantity for those of you who can't attend and would like to get your hands on a copy of this great DVD.

You can get all of the info and order from my website at the link below. Thanks! And I'll see some of you on July 16th!

http://www.ventriloquism101.com/products/videos.htm#showmanship
Posted by Lee Cornell at 5:05 PM No comments:

One Question Series - Auto Pilot Attitude About Your Show?

It's been a while since I've added a new segment of my
"One Question" series.

Before I get to the question asked by a reader of my VenTips
email newsletter, let me remind you that the 2014 Vent Haven
International Ventriloquist ConVENTion is fast approaching!

It's from July 16-19 at the Cincinnati, Ohio Airport Marriot Hotel
and Convention Center. A beautiful facility! And 4 days of great
workshops, rubbing shoulders with the pros, fantastic shows,
2 full dealer's rooms and much, much more!

There is still time to register! Just head on over to

to download a schedule of events and registration form. I hope to
see you there!

Now, to answer (or try to) this question from ventriloquist Bob M.:

"Lee, my biggest challenge is complacency. I look back to my many
shows and I realize how many times I would do a show like I was on
automatic pilot. That's bad. For when you lose your enthusiasm you
can lose your crowd."

Great question Bob and not really easy to answer. How does Jeff
Dunham, Terry Fator and other full-time ventriloquists, who
do hundreds of shows a year, not get bored and start performing
like a robot?

Let alone performers who are not necessarily famous, but who
keep busy enough that at times it's almost boring to them to
perform their routine.

I would start off by saying that one needs to keep the focus
off of yourself and thinking "same show. different day" and
instead focus on the audience and realizing before you walk
on the stage for every performance,that you OWE your audience
your best. They've come to see YOU and be entertained.

To give less than your best cheats your audience.

Things that will help you are:

-Remembering that most of the people who have come to
see you perform may not have seen your show before.
It's the first time they have seen you, even
though it may be the 1,000th time you've done your routine.

-Keep your audience engaged in your act. As you feel
the energy from the crowd, it will help "wake you up"
from any "auto pilot" mode you may be in.

Legendary vent Bill DeMar once told me a story of a
county fair he was working and he had done the same show
over and over during the run of the fair.

He too, went into an auto pilot mode and began mentally
reading the t-shirts of people in the audience. He wasn't
sure how long he was looking around reading all
of the crazy things on the audience members t-shirts, but at some
point in the show he realized what he was doing.

It mortified Bill. He realized these people had
come to see him give his best and he was just going through
the motions.

He vowed never to do that again and started FOCUSING
on giving his audience the best every time he performed.

Again, realizing as a professional entertainer he OWED
his audience nothing less.

Really watch the faces of your audience. When you see the
smiles and hear the laughter, it makes it easier to enjoy
making your act seem to that particular audience that it's
the first time for you, too(even though it's not).

Use the opportunity while looking at your audience to
try and ad-lib a bit if you notice something that strikes
you funny with an audience member that you might be able to
play off of.

Try to add small changes from time to time. I don't mean
an overhaul of your act every show, but look for tweaks
in your act to change it up enough to make it more fun for
you.

And sometimes you just have to suck it up! Some shows will
go better than others, but you need to be 100% professional
and "fake it" if you have to so the crowd believes that you
are having as much fun as they are.

Don't forget - you have worked hard to become a good
performer.

And performing is what you wanted to do!

It should be fun and exciting for  most every show you do.

Just think of what you COULD be doing...hmmm...
working at a day job you hate at "Clem's Roofing and Siding"
just to get a weekly paycheck, or getting up in front of an audience and
creating laughter and excitement!

So, always give your best. Every time. Under all circumstances.
When you do, your audience will know it and you'll feed off of
that energy!

I hope that helps, Bob. Thanks for your question.
Posted by Lee Cornell at 3:29 PM 1 comment:

Annie Roberts, Media Coordinator for the Vent Haven ConVENTion stops by to chat with me a bit about this years upcoming convention. Hope you enjoy the video! And I hope to see you at the 2014 Vent Haven International Ventriloquist Convention. July 16-19.

More details and registration information at:

Posted by Lee Cornell at 8:21 AM No comments: 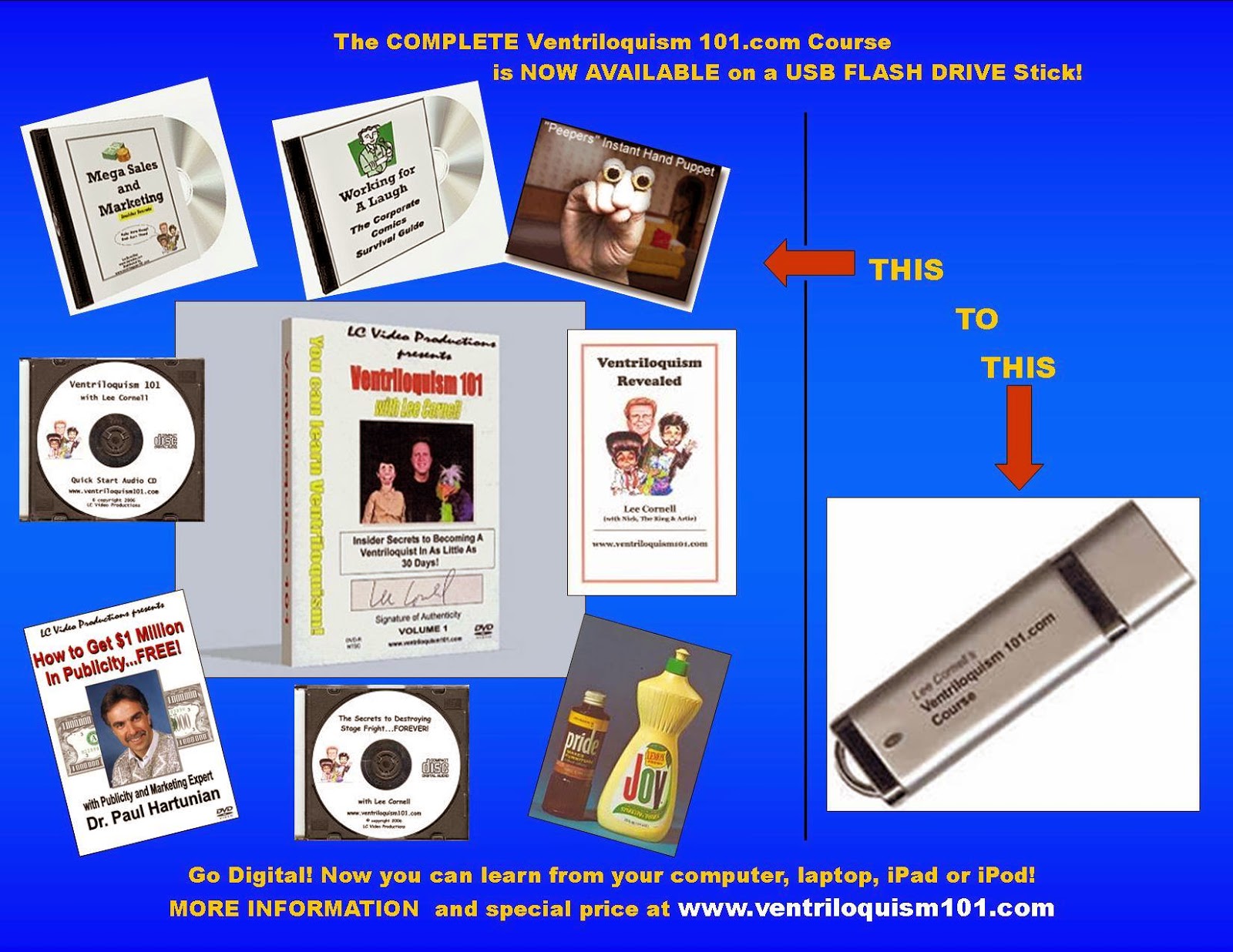 People have been asking me for years if I was ever going to offer my Ventriloquism 101 course in a digital format as an option. I am happy to announce that I have finally converted all of the DVD's, CD's and printed materials over to high quality mp4 videos, mp3 audio files and pdf files for all of the written materials. Everything comes on a small, compact USB flash drive.

Now you can transfer the files from the USB flash drive to your computer or laptop and watch, listen and read from your computer. You can also drop the files into iTunes and load onto your iPad or iPod.

Files have been tested with Windows Media Player and VLC Media Player (a free download) as well as iTunes. I'm sure the files will work on other players as well, it's just that I've only tested with the programs above.

Check it out at:
http://ventriloquism101.com

All at a special, pretty crazy limited time low price. This is the exact course I've sold thousands of copies for up to $147 for over 18 years from ventriloquism101.com

Looking forward to showing more people how to become a ventriloquist and a price point that nearly anyone can afford!
Posted by Lee Cornell at 7:02 AM No comments:

Here is a short video of some of the reasons you should attend the Vent Haven International Ventriloquist ConVENTion!
Posted by Lee Cornell at 12:47 PM 1 comment: