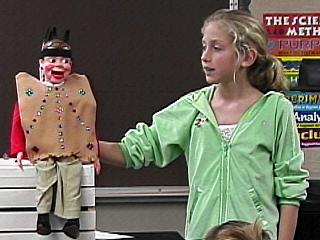 My 11 year old daughter, Heather, gave her debut ventriloquism performance today at her school. She had a book report project to do based on a popular kids book, "The Indian in the Cupboard."

I decided to let her use the very first vent figure I ever received - a Jerry Mahoney / Little Ricky I got for Christmas in 1966 - as part of her report presentation. 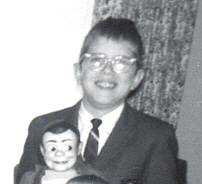 Heather dressed Jerry (temporarily called Little Bear - the character from the book) in an Indian costume she made herself. We also built a wooden box with a door that acted as the cupboard, case and stand.

Heather and I (OK, mostly me), wrote a short script with several cute jokes.

Her teacher was impressed and her classmates really seemed to enjoy her routine. I know it was not easy for Heather to get up and perform vent for the first time - especially in front of her classmates (and mom, who was videotaping the act).

It was exciting for me to see her do a performance with my first vent puppet. (snif')