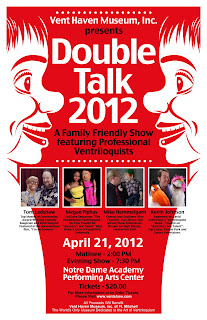 I wanted to make you aware of a really great vent show coming to the NDA Performing Arts Center in Park Hills, Kentucky (near Cincinnati, Ohio) for two big performances on April 21st.

And we are talking some of the best vent talent anywhere being on stage for this very special event.

All proceeds from ticket sales will go directly to help support, renovate, update and maintain the world's only ventriloquist museum - the world famous Vent Haven museum in Ft. Mitchell, Kentucky.

If you are within driving distance, you do not want to miss this event! How often do you get to see world class ventriloquists all on one show? Unless you attend the annual Vent Haven ConVENTion, I'd say never.

The outstanding line-up for this family friendly show includes:

Megan Piphus:
Megan began performing vent at age ten. In 2008 she was a guest on the Oprah Winfrey special: The World's Smartest and Most Talented Kids. She plans on continuing her career as a musical ventriloquist bringing a positive and motivational message to her audiences.

Mike Hemmelgarn:
I've seen Mike's show many times and his combination of great ventriloquism, magic and breathtaking juggling makes this an act that is hard to top. Mike has been performing since he was eight years old and has performed thousands of shows in nearly every type of venue. He will have you falling out of your seat laughing with his vent humor, magic and his ability to juggle some unique items...you know...like tennis balls, bowling balls, very sharp knives, machetes and torches. Watch his act for the fun and come away with the fact that he lived through it!

Kevin Johnson:
Kevin began his vent career at age nine and has been performing ever since. He is probably most recognized for his appearances on "America's Got talent" and "The Late Show with David Letterman." He also worked a nine year run at San Diego's Legoland California theme park where he performed nearly 9,000 shows.

Tom Ladshaw (also your MC for the event):
Tom is a veteran of thousands of shows over his 35 year career, performing in more than 20 countries. He has worked with celebrities such as Regis Philbin, Robert Stack, Whoopi Goldberg, Roger Moore, Martha Stewart and many, many more. Also, Tom is recoginized as the worlds foremost expert on the history of ventriloquism, also owning one of the largest private collection of ventriloquism memorabilia in existence.

This is truly a very rare opportunity to see such amazing talent on one stage and also support the Vent Haven museum. I also just found out today that as a special treat, all of the performers will be available after the shows to meet and greet the folks who attend.

There will be photo-ops, autographs, and a souvenir table with posters and other items. I'll be there too, so I am personally asking you to attend and help a great cause. Plus, as a reader of my VenTips Blog, I'd love to meet you in person!

With the exception of Megan Piphus, who I look forward to meeting, I am good friends with all of the other performers and can personally guarantee you will be attending one of the best vent shows you've ever been to.

You can get all of the details for the event here:

See you there!
Posted by Lee Cornell at 5:56 PM