What a great visit I had today with my friend, figuremaker Conrad Hartz at his home in Beaufort, SC.

I had not seen him since the 2004 Vent Haven convention, so it was good to spend the afternoon with him.

I've been coming to Hilton Head Island nearly every year for the past 12 years for our family vacation. 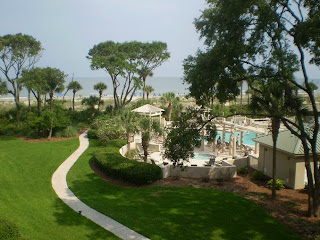 View from our condo balcony-Click to enlarge

I can't remember how many times I've told Conrad I would try to stop by and see him.

I never had, until today.

We spent the afternoon sharing stories about vents we've known over the past 30+ years. He showed me a couple of completed figures he built recently. 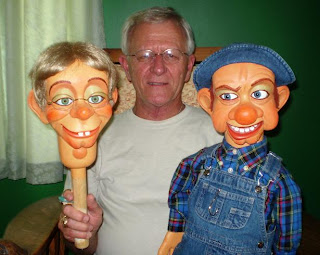 and even more interesting to me was being able to see one of his figure heads in the process of being built. 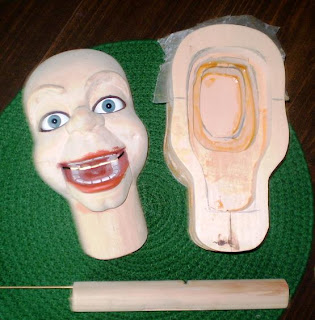 Conrad shared with me how he assembles the basswood pieces, carves out the face and some of his "secrets" to installing mechanics and finishing the head.

I left a figure of mine with Conrad which he is going to make a dwarf body for.

We spent a fair amount of time on the topic of Howdy Doody and Conrad told me the story of Howdy and Bob Smith's visit to a "mini-convention" he organized in 1995.

And yes, Conrad did take me into his extremely well organized, brightly lit, air conditioned, large workshop.... .Riiiiiiiiiight. Here is a photo of his shop. Amazingly, he only needs 4 tools and a bandsaw to build his figures, so who knows what all the rest of the stuff in there is for... 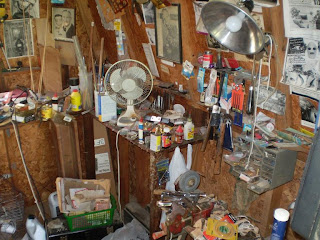 Hard to believe a figure maker with this much talent can create such beautiful figures in such a small space.

The "break away" marionette King puppet Conrad carved was amazing. I had no idea what he was going to do with it. This single puppet instantly turned into a Queen marionette and 4 "kids" all hanging from the original set of strings the King was attached to just a second before. 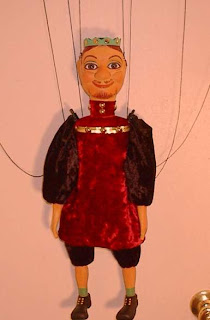 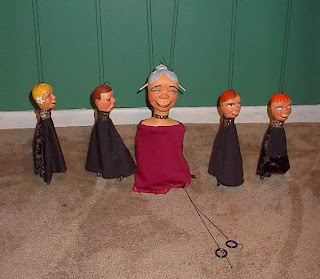 After-This is the King puppet after it breaks away into
pieces, transforming into a Queen and 4 children-
Click for larger view

He also demonstrated a clown marionette that he had rigged with a clear piece of tubing going up to Conrad's mouth. This allowed the clown to be able to blow up a balloon. Clever.

You can see more of Conrad's work here:

In my opinion (and many others), Conrad is one of the top figuremakers in the business. All hand carved out of basswood. 100% built, painted and finished by him.

He also is indeed a real gentleman and I only wish I had stopped by in years past. The afternoon went by much too quickly. Thanks Conrad.
Posted by Lee Cornell at 11:31 AM