Well, somehow I failed to post photos on the blog here back in 2018.  Myself, along with David Robison and David Crone each received the WS Berger Distinguished Service Award for outstanding contributions to the art of ventriloquism at the Vent Haven Convention. Very humbling to say the least.

I love this art form and have tried to help in any way possible by teaching new vents, or supporting the Vent Haven Museum. 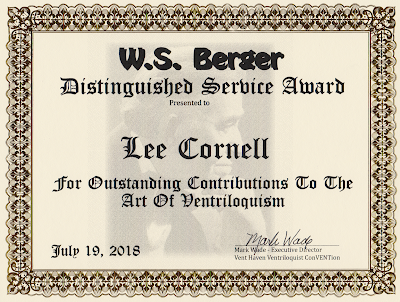 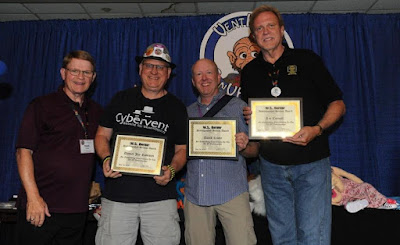 A Day in the LIfe of Little Jeff


Why do I put up with this...a day in the life of Little Jeff. Check out the YouTube video. 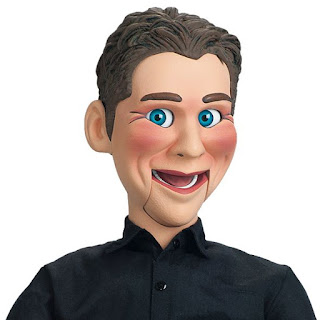 Posted by Lee Cornell at 9:30 PM No comments:

After a few years of absence, the Double Talk ventriloquist show is back! It's on April 20th at the Notre Dame Academy Performing Arts Center near Cincinnati, OH. The show is from 3-4:30pm.

On the show this year: Jeff Goltz, Mike Hemmelgarn and David Turner!

Watch the short video for more info. See you there! 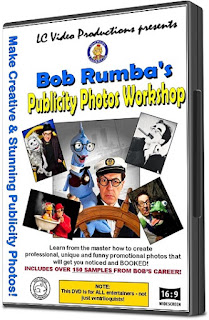 Bob Rumba's fantastic NEW DVD "Publicity Photos Workshop" is being released on 11/5/18. However, until the official release date, I am offering a special pre-release price that includes FREE shipping to anywhere in the US. And the cover is AUTOGRAPHED by Bob. This workshop was presented at the Vent Haven ConVENTion this past July. The workshop included Bob showing over 150 of his professional publicity photos spanning his successful career and the story behind the set-up of the pictures. There was also a segment where he had volunteers from the audience bring their puppets up on stage and Bob explained how to set up awesome photos. The pre-order price is only $19.95, and again, includes free shipping to anywhere in the US. If you live outside of the US and are interested in a copy, please email me at lee@ventriloquism101.com and I'll calculate shipping for you. Here is the link to order at the pre-release price: https://tinyurl.com/rumba-publicity-special Reserve your autographed copy today. Thanks! Lee
Posted by Lee Cornell at 12:58 PM No comments:

The 2018 Vent Haven ConVENTion - from my perspective 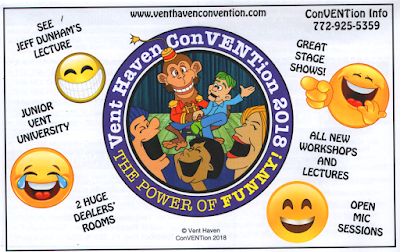 I wanted to take a few minutes here and give you a little review of the
Vent Haven International Ventriloquist ConVENTion I was at last week -
from my perspective.

For those of you who don't know, the convention takes place every year near Cincinnati, OH - mainly because the location is just a few minutes away from the only museum in the world dedicated to the art of ventriloquism -
The Vent Haven Museum, in Ft. Mitchell, KY

This year was the 42nd annual get together. I went to my first convention in 1981.

Once again, Executive Director Mark Wade and his team knocked it out of the
park. Just a fantastic lineup of workshops and shows again this year.

The event was at a new location this year - The Cincinnati Airport Holiday Inn.
A very nice hotel and they seemed to have no problem handling the over
500 who registered.

The theme this year was "The Power of Funny."

I was saddened by the loss of two of the greats in our art, Bob Isaacson and
Jerry Layne over the past few months, but I'm sure they were looking down
on all of us.

I also missed my good friends Jimmy Nelson, Sammy King and Al Stevens,
who were not able to attend this year. And I know I'm missing others who
couldn't make it.

Since there are so many people there and so much to do, I didn't have the
chance to go to all of the workshops. Plus, I've been attending for so many years,
sometimes I just like to hang out in the huge lobby and find some other vent
friends to sit and talk to. I did that a lot this year.

Just a few of the highlights included (remember, I wasn't able to get to everything
on the schedule, although I would have liked to - sorry if I miss mentioning some
of you. I know you all did a terrific job ):

-The BIG WEDNESDAY NIGHT SHOW with Neale Bacon from Canada, Lisa Laird
and Al Moessinger. They all had funny acts and were well received by the
audience,

-Bob Rumba's workshop on how to set up publicity shots was a lot of fun.
Bob's lectures always border on crazy. He's one of the funniest guys I know.

-The Junior and Senior open mic sessions. There are some really talented folks
who sign up for this each year - especially the kids. It's great to see the stars of t
omorrow performing and then getting critiqued by a panel of professionals.

-Shane West's "Creating Character Voices" was very good and had a ton of useful
content and ideas.

- I especially enjoyed Austin Phillips and Tyler Ellis' "Fully loaded - Hard Figure
Care and Repair" workshop. It was cool to see the inner workings of some classic
figures. These two are really becoming the best as the new generation of hard
figure makers.

- Jeff Glotz and Jake LaMarca's "Comedy Club Experiences" was fun and the
Friday night International show is always a highlight.

-The annual raffle was a blast, as usual. For some reason, Mark Wade and
Jeff Dunham were "on" to a level I'd never seen before with their back and forth
jabs at each other as the raffle prizes were being awarded. Of course, I didn't win
any raffle prizes, but was honored and humbled to receive the
WS Berger Distinguished Service Award this year.
And congrats to David Crone and Daniel Robison - the other recipients this year.

- What can I say. The SATURDAY NIGHT ALL STAR SHOW was one of the best
I've ever seen. Keith Haddrill, Phil Hughes and Darren Carr literally had the whole
room on the floor with non-stop laughter. My eyes were watering.

And don't forget the free tours to the Vent Haven Museum, the two packed
dealers rooms and just the opportunity to hang out with like minded performers
from all parts of the world.

There was also an update on the progress of the new, state of the art museum
which will be completed in the near future.

If you've never been to the convention, you simply MUST attend.
If you go once, you WILL return again.

Here are a couple of links you should check out:

The four days always go by so fast and I'm already counting down the days
until next years convention.

I'm thrilled to announce that my new website, The Ventriloquist Academy, launched this past Monday, July 23rd.

So far, subscriptions have been brisk. It's good to see even more people wanting to learn how to become a ventriloquist. My goal over the past 21 years has always been to try and help keep the art of vent alive and growing - by offering the best quality educational and entertaining materials I can to the ventriloquist community.

The Ventriloquism 101 website, which launched in 1997 with just my single VHS video - then added a DVD edition and other videos, CD's and books - has seen a drop in buyers in recent years. And I think that has to do with folks not wanting to purchase physical DVD's, CD's and books anymore.

That's why I started The Ventriloquist Academy. To get into the streaming and digital age.

Ventriloquism is growing again as an art form. With the likes of Jeff Dunham, Daric Lynne Farmer,Terry Fator and others helping lead the charge. And it's showing no signs of slowing down any time soon!

We had good numbers again this year at the Vent Haven ConVENTion, with near 100 first time attendees.

And with a new museum on the horizon, the future (and past) of ventriloquism looks strong. Check out what's going on at the museum here:

If you missed the information page for the Ventriloquist Academy, you can see it here:

Wow. I am really getting excited. After being online selling my Ventriloquism 101 video course for over 20 years, I am just a week or two away from launching the Ventriloquist Academy website. This will be a membership site where folks will be able to pay a very reasonable fee and get private access to my video course and TONS of other materials to help them become a great ventriloquist. Look for more information and the official launch date over the next few days! You won't want to miss getting in on this at the very beginning with a really special introductory price!
Posted by Lee Cornell at 6:49 PM No comments: